What, if any, has been your experience with the Hawthorne effect on a job?

I would say that the current job I have is the most likely to have given me experience with the Hawthorne effect. After I had been there for a few months he called me into his office and asked what things I would like to change to make the work environment better. I named a few things I thought would make my day easier; I got a new chair, keyboard, standing mat, and cart to load my pulled orders on. Him calling me in and asking me what I wanted made me feel like my opinion counted and mattered to my manager. These type of conversations we a common place with us, what material did I think the store would benefit from bringing in and stocking, would things work better in a new location, etc..

Describe a supervisor who inspired and motivated you — what were their characteristics or actions that made such a positive impact?

I would say that my last supervisor was the most inspirational and motivated me the most. This is the same one that I experienced the Hawthorne effect with. The actions and characteristics that he has is he cares a lot for his employees and the welfare of the branch. He takes the time out of his busy day to sit down and talk with you through problems and issues that you had. He also mentored me when I decided I wanted to take the next step and be a manager myself. He would stay late to walk me through procedures on invoicing and closing up. Gave me cheat sheets and notes to walk me through procedures I would need to know. I felt that he was rooting for me to succeed and wanted me to have all the tools to do it.

1. Research and find an alternative/opposing point of view to Climate Change as proposed in the Introduction.

2. What obligations do we have to future generations?

We are under obligations do everything we can to pass on a world that is making strides to correct and stop climate change. One way we can do this is making sure we do not overlook the small things, the book stated that we have a way of not noticing small environmental issues but focusing on the larger issues. We have to understand that yes, the larger issues have a sudden and drastic impact on the environment but the smaller ones that build up over time are also important. The United States has a tendency to pass bills and legislation in response to the large disasters but our follow through is lacking. We spent billions of dollars following the Clean Water Act to try and rectify water population, but over 45 years later we have seen very little improvement as a whole.

3. Is our commercial exploitation of animals immoral?

This question is one that doesn’t have a clear-cut answer for me. I was born and raised on a farm and work in a sales yard that profits greatly off of dairy cattle being sent to slaughter. I know that a large number of the people I work with do everything they can ensure the welfare of the animals. I think that the commercial exploitation of animals is a necessity in our society today. Two to three generations ago people were much more dependent on themselves or their communities for food. My grandfather would talk about trading for eggs with the neighbor when he was growing up. Even my father raised and butchered cows, pigs, and chickens to feed the family while he was growing up. These examples are much less likely today as we are more likely to buy our meat and produce from the store rather than grow it. In order to feed the United States population, animals have to be raised on a commercial scale. Every sales yard, feed lot, and butcher house are owned by different people and therefore the level of care can be drastically different. Do I think there should be some stronger guidelines in place to make sure animals are being treated fairly, yes; do I think the practice of producing animals on a commercial scale is immoral, no.

4. Who should pay the cost for protecting the environment — those responsible for causing the pollution or those who stand to benefit from protection and restoration? Explain your position.

This is a tricky question and I honestly feel that it should be treated like a tax. My loosing a few a few dollars on my pay check does not drastically affect my standard of living. If we were deducted $2 every paycheck, I would be paying $48 a year for environmental protection and restoration, if every working American paid that it would bring almost $6.2 billion a year. If we as a country can not make a difference in pollution with that then we need to take a hard look at what is causing the pollution. The reason I think it should be looked at like a tax is because every person on this planet has contributed to the issues we have. My car lets of pollutants every time I start it. I do think that when companies violate the EPA standards and blatantly pollute they should be fined. That fine should go in to fixing the issue that it caused and be treated as a way to hopefully deter any further pollution.

After doing some research I decided to go with the Boeing 737 grounding by the FAA. In a rush to get a new more fuel efficient plane on to the market to compete with a new Airbus   model. It is reported that Boeing may have cut corners and received from the FAA a much more lenient safety certification approval. This rush in production lead to hundreds of people being killed in multiple crashes. The United States FAA was the last ground the 737. Whether it was faulty censors or lack of pilot training it is clear that all safety protocols and precautions had not been followed prior to it being released to market.

THIS WEEK’S ASSIGNMENT: At some point in your life, I hope you have observed some of these normative theories in action. Choose a situation from your life and describe how it applies to one of the theories you have just read about in Chapter 2 (Kant, Egoism, Utilitarianism, Good Will, Prima Facie Obligations, others, etc.). Discuss why you identified that particular situation with the stated theory. Be sure to describe the situation or example. If you have not observed a theory in action in your life, find an example in our history and discuss how the theory applies to the situation.

In chapter two we looked at normative theories of ethics. Utilitarianism is the theory that “we should always act to produce the greatest possible balance of good over bad for everyone affected by our actions” (Shaw, 49). What this means is that the decision you make is for the most happiness of everyone involved. The best (most frequent) example of this is in animals. I went to grab a quick bite to eat at the mini mart down the road from a friends house a few months ago. When I pulled in I noticed two smaller terrier sized puppies running around trying to get the attention of anyone in the parking lot. I got out of my car petting the puppies as I walked inside. When inside I heard the employees of the mini mart saying that the dogs had been there all day and that no one had claimed them or came looking. One employee said that if they got out on the highway and got hit that it was fate and not much they could do about it. So I ordered a few extra chicken strips and went to see if I could catch the puppies, I had called my friend and asked what her opinion was. We both agreed that we couldn’t just leave these two there, so I lured them up to my car with chicken and managed to get both of them in the car. We posted on Facebook that we had found two little dogs and was willing to return them to a owner who was missing them. In the meantime my friend and I both decided to take one, well six months later we are both very pleased with our mini mart puppies. Piper has been such a huge blessing keeping my other small dog active and perky, especially since losing my old lab. Here is Piper doing what she does best, distracting me from homework. 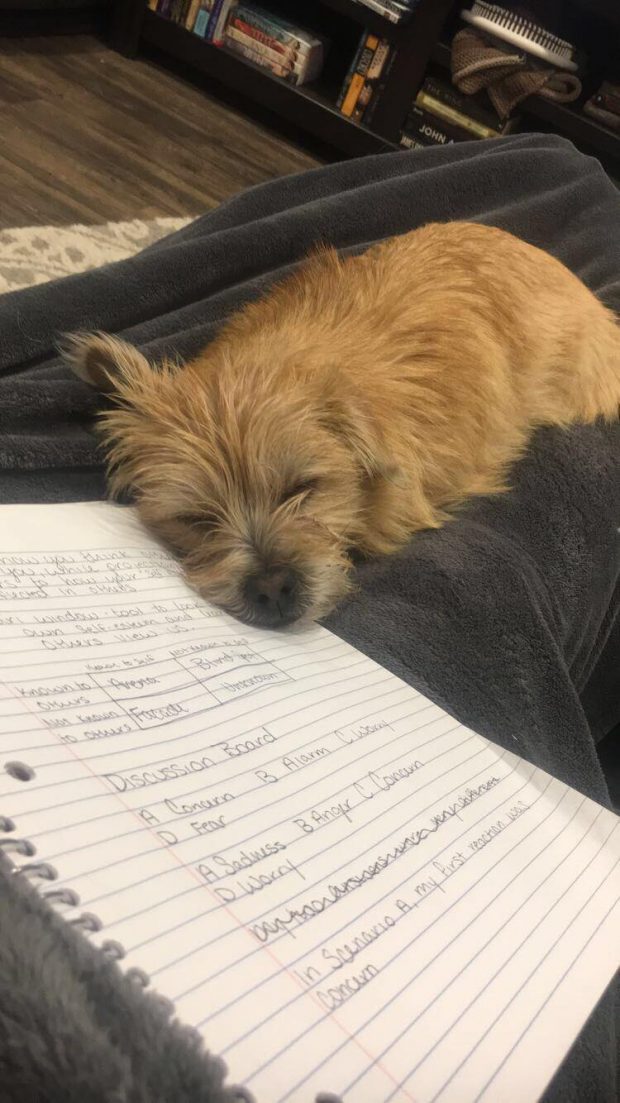 We begin learning and developing ethics from early childhood mostly from our parents. They are able to “shape our most fundamental attitudes about what is ‘right’ and what is ‘wrong'”(Head, 2006). We unknowingly learn these ethics as small children. Religion is also a major factor in our ethics. Since each religion as there own “code of ethics” it preaches, followers would view those ethics as very important uphold. We gain our professional code of ethics by vows we made   to professional organizations and employers.

Head, G. (2006). Where Our Ethics Come From | Expert Commentary | IRMI.com. Available at: https://www.irmi.com/articles/expert-commentary/where-our-ethics-come-from [Accessed 23 May 2019].